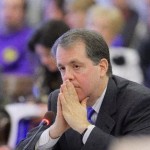 (Video) Facing questions on mid-year budget cuts, Gov. Chris Christie’s acting treasurer told an Assembly committee today it’s time to move on and focus on next year.Acting Treasurer Andrew Eristoff testified this morning in front of the Assembly Budget Committee, where Democrats questioned the analysis that went into $2.2 billion in mid-year funding cuts to areas such as hospitals, schools and charities. “The impact on people’s lives are worthy of a greater debate,” Assemblyman Louis Greenwald (D-Camden) said after the hearing. “There wasn’t a lot of depth put in to the look at the cuts and how far that ripple effect went. I think they were looking to find dollars in state government to get through this year.”

Eristoff said it is time to stop picking over funds Christie earlier this month sliced from this year’s budget – known as the Fiscal Year 10 budget because it runs through this June. Instead, he said the administration has until March 16 – when Christie delivers his budget address – to create a plan for the year that runs through June 2011.

“I don’t want to sound absolutist, but the fact is that action was taken, and now we are focused on Fiscal ’11,” said Eristoff, who is up for approval today by the Senate. “Fiscal ’10 is over.”

Several Democrats on the committee said the administration did not think hard enough about the “ripple effects” of the budget cuts – such as jobs lost and federal matching funds sacrificed.

Eristoff said the cuts had to be made quickly because the administration was dealing with a “gathering financial storm” and could not launch a full-blown budget process.

Greenwald said the elected representatives were “closer to the ground” and could have given valuable input to save jobs.

“I’m not asking for a full-blown budget process,” Greenwald said. “Just pick up the phone and call me.”

Christie made cuts across many departments and cut $475 million from local school district aid, equal to an amount the schools had above a 2 percent surplus level. That meant cuts were made unevenly – and critics say it unfairly punishes schools that were prudent.

Democrats have argued the state should have cut into its own $500 million surplus – carried over as a cushion from year to year – instead of taking from surpluses of school districts across the state.

Republicans counter that the schools still have a 2 percent cushion, while the state’s surplus is less than 2 percent of this year’s $29 billion budget. Star Ledger