A Step by Step Guide to Leading the Pesach Seder, Reviewed by Harav Shmuel Felder 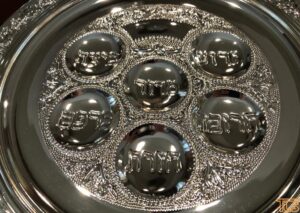 If one isn’t well and feels any of the halachos will be difficult to fulfill, consult with your Rov

הא לחמא עניא: lift the matzah [or the kaara which contains the matzos]. Afterwards, some have the custom to move the matzos to the far end of the table [or removed completely] so the children should inquire as to why they are being moved and not eaten. They should be answered that we cannot eat before doing the mitzvah of Sipur Yetzias Mitzrayim.

The second cup is poured.

מה נשתנה: If children are present, they ask the מה נשתנה questions. If not, an adult should ask the questions.

The kaara matzos are returned to their place, where they should remain uncovered during magid.

When drinking the second כוס lean to the left side.

The בעל הבית takes a kzayis of each of the top two matzos to eat. He should also give two kzayis of matza to everyone else [although the mitzva requires only one kzayis, we eat two, if possible, because some say our shiur of kzayis is only half the true shiur.]

The matza must be eaten leaning.

One should have in mind when eating matzah that they are fulfilling Hashem’s mitzah to eat matzah.

In order to eat the matza all as closely together as possible, it is preferred to begin by chewing as much matza as possible without swallowing, and only begin swallowing when no longer able to chew more matza.

One should not talk about anything unrelated to the seder until after כורך is eaten.

Make the brachah “על אכילת מרור” and eat at least a kazayis of the maror. Do not lean while eating it. If possible, the entire kazayis should be eaten together.

One should have in mind when eating maror that they are fulfilling the mitzah to eat maror.

Eat a large meal, but leave appetite for the אפיקומן. Do not drink too much wine, for risk of falling asleep and not completing the Seder. Do not drink wine that will require making a “הטוב והמטיב“. We do not eat roasted meat Pesach night.

Eat the אפיקומן, and do not eat any food after it. It should be eaten before חצות.