A Pennsylvania Win for Romney Is An Early Election Night For Us All: An Amateur’s Analysis 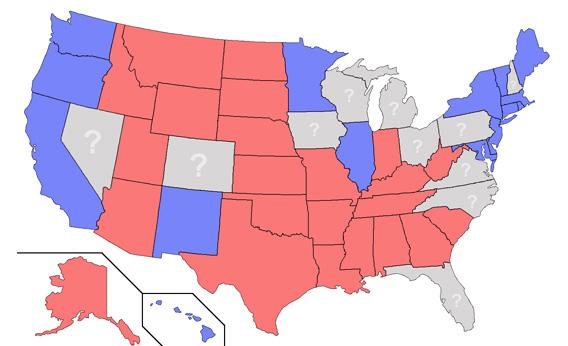 By Aaaron Joseph. The past few presidential election cycles have had all of us waiting and waiting for results; always for hours- sometimes for days. In 1980, Jimmy Carter, a one term Democrat, was tied in the polls with Republican challenger Ronald Reagan up until Election Day. Some pundits even predicted a Carter victory. Ronald Reagan won in a landslide with 489 Electoral College votes and a popular vote surplus of over 8,000,000 votes. Is the 2012 geopolitical mapping the same? No! Will Mitt Romney win is as huge a landslide as Ronald Reagan did in 1980? I don’t think so, however….

I don’t profess to be any sort of political junky or even an amateur for that matter, but being a big fan of the political process and studying up on this year’s contest I would like to suggest the following: If Mitt Romney wins in Pennsylvania, the election is effectively over, and he will become the next president.

Mitt Romney is far more popular with mainstream America than Barack Obama is popular, even with his own Liberal Democratic base. That being said, it is all a matter of voter enthusiasm and turn out at voting booths. The Republicans are eagerly enthusiastic, and mainstream America wants a change.

Mitt Romney has according to nearly all polls around 206 electoral votes in the states that he is ahead of in the polls. Barrack Obama has around 237 in his column. A majority of270 votes is required to win the election. The question is however, how the 8 states that control the other 95 electoral votes will vote. All in all the polls are closer than ever in these states and no one is predicting them. As they say- it’s been a great ball game.

I firmly believe after crunching all the numbers and reviewing many indicators, that should Mitt Romney win any of the Northeastern states that are predicted for President Obama, Mitt Romney will become president-elect come Wednesday morning. Anything is possible from Maine down through New York and New Jersey. Ronald Reagan won these states in an upset victory in 1980. Yet since that time a generation of New Democrats elected Bill Clinton in 1992, and these states consistently voted Democrat in presidential elections.

I believe Massachusetts may be closer than predicted; after all, Mitt Romney was its governor. New Jersey will surely be closer than predicted, perhaps even New York, although I am unconvinced, that Mitt Romney can pull off an upset in any of these states. Although if the borough of Manhattan follows the lead of Queens and Staten Island in voting Republican, Mitt Romney can win New York. Will the Hurricane aftermath create that scenario? Who knows?

What I am suggesting is Mitt Romney will win Pennsylvania. The last polls for Pennsylvania have Mitt Romney and Barrack Obama all tied. This is a very strong negative indicator for an incumbent that won the state in his first election by over 10% of the vote. It means that the mainstream is unhappy with the incumbent and that the challenger has all the momentum going into Election Day.

Pennsylvania is traditionally a conservative state that has been voting Democrat since Ronald Reagan left office. However if you read the breakdown of its voting history, it is the metropolitan area of Philadelphia that always gives the Democrats the win. Not because there are so many more people in Philadelphia than anywhere else in the state. But seemingly, because, a good portion of the state simply does not vote, and a good majority of the voting public in Philadelphia votes Democrat. Should the rest of Pennsylvania vote a Republican majority, the state will vote for Mitt Romney. This boils down to voter enthusiasm, or how unhappy the mainstream is with the incumbent.

If Mitt Romney wins Pennsylvania, he doesn’t need Ohio or Iowa or Minnesota or even Nevada- which are all considered “toss-up states” to win the election- although I think he will win some of them anyways. He will need to win in Florida, Virginia and Colorado – “toss-up states” which he is currently ahead in latest polling anyhow.

If Pennsylvania goes for Mitt Romney, I strongly believe we will have a new president come January, and it will be an early election night for all us political fans.

In 1980, Jimmy Carter called Ronald Reagan during the early evening of Election Day to concede the election and congratulate Mr. Reagan on his victory. Then Mr. Carter went on to offer his concession speech to all his supporters, and everybody else went to sleep before mid-night- relieved! Do I believe it will be as huge a landslide in favor of Mr. Romney as it was for Mr. Reagan in 1980? No I don’t think so- not exactly- but hey- after Sandy, and the recession, and the deficit, and Obamacare… anything is possible!