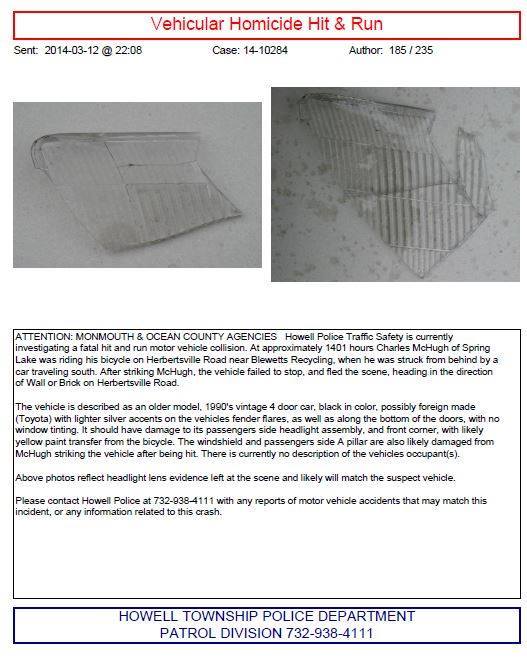 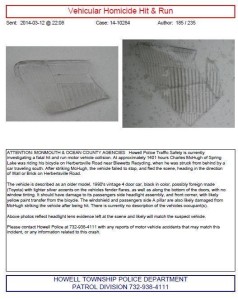 A Howell Township man was arrested and charged Monday for the fatal hit and run of Charles McHugh, 58, of Spring Lake, after surrendering to police, announced Acting Monmouth County Prosecutor Christopher J. Gramiccioni.

Abraham Chapnick, 83, of Ramtown Road, is charged with one count of second degree Knowingly Leaving the Scene of a Motor Vehicle Accident Resulting in Death and several motor vehicle summonses in connection with the fatal hit and run of McHugh around 2 p.m. on Wednesday, March 12, 2014.

A joint investigation into this case was conducted by the Monmouth County Prosecutor’s Office and Howell Township Police Department which determined McHugh was riding his bicycle along Herbertsville Road in Howell Township, when he was struck from behind by a 1995 black Lexus LS 400 Sedan, owned and operated by Chapnick.

Chapnick surrendered himself to the Howell Township Police Department on Monday, March 31, 2014, and posted bail in the amount of 150,000 with no 10 percent cash alternative, as set by the Honorable Francis J. Vernoia, J.S.C.

Anyone with additional information about this case is urged to call Detective Eric Kerecman, of the Monmouth County Prosecutor’s Office, at 1-800-533-7443 or Patrolman Matthew Cherney, of the Howell Police at 732-938-4111.

Despite these charges, every defendant is presumed innocent, unless and until found guilty beyond a reasonable doubt, following a trial at which the defendant has all of the trial rights guaranteed by the U.S. Constitution and State law.

If convicted of Knowingly Leaving the Scene of a Motor Vehicle Accident Resulting in Death, Chapnick faces a sentence of five to ten years in a state prison.