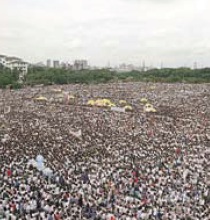 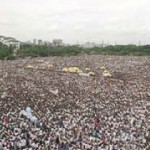 By Shalom Yitzchaki. As the world welcomed the seven billionth baby to its ranks, celebrations were tempered by worries over the strain a population boom will have on the world’s already depleted resources. But that didn’t stop the cakes, the festivities, and the international cameras. What will the world look like when the eighth billionth baby makes his entrance?

With over 300,000 babies born every day, no one could be sure that October 31, 2011, would be the day the world’s population would hit seven billion. But that didn’t deter United Nations secretary-general Ban Ki-moon from issuing internationally televised congratulations to Danica May Camancho, weighing in at 5.5 pounds (2.5 kilograms) to a blitz of camera flashes in a hospital in Manila, Philippines, as the seven billionth citizen of Planet Earth.

For almost eleven years now, since the birth of the world’s six billionth child, UN demographers and the United States Census Bureau have been waiting for the moment when an additional billion human beings would be added to the world’s population ranks. While the US Census Bureau maintains that the world population will not hit the seven billion mark until March 30, 2012, the UN was not deterred. So Seven Billion Day got underway despite the wrath of demographers, and gave the Philippines a reason to rejoice.

While the Philippines was the first country to declare a “winner,” babies born on October 31 were showered with gifts in various countries around the world.

The digits on the World Population Clock in UN headquarters change almost as fast as those on the United States National Debt Clock in Times Square; the world’s population increases by 215,120 every day. Just 11 years ago, then UN secretary-general Kofi Annan visited a Sarajevo hospital and crowned newborn Adnan Mevic as the six billionth human in the world’s population register.

It was a symbolic choice, of course, since just like last week’s ceremony, no one knew exactly which baby around the world was number six billion. But after a decade of war in the Balkans, Sarajevo seemed like a fine place to select a newborn who would be an emblem for hopes of world peace.

After his five minutes of fame, whatever happened to Adnan Mevic, symbol of peace for mankind? What happened to the grandiose promises and bombastic speeches delivered by the prominent guests who had been photographed with him?

Adnan is now a seventh-grader, living with his parents in a single-room apartment in the Bosnian city of Visoko. At the time, his parents were granted a monthly stipend of $140, a gift from the municipality of Sarajevo in appreciation for the gift that had landed in their laps — the privilege of being home to an infant who had achieved such worldwide fame — but the money was spent purchasing medications for Adnan’s ailing grandmother. Today, Adnan’s father, Jasmin, is terminally ill with colon cancer, and his mother lost her job as a textile worker three years ago. Adnan himself has been diagnosed with a small hole in his heart. The family survives on $350 a month and cannot afford the healthcare they need.

After the most recent festivities, reporters flocked to Sarajevo to see how the previous billionth youngster was faring. They were treated to albums stuffed with pictures and newspaper clippings celebrating their son’s birth, but what use are newspaper clippings to them when their refrigerator is empty?

“Adnan’s birth was a very special occasion for us,” said Adnan’s mother. “The festive atmosphere made us feel something really important was going on. But the day after the celebrations ended, they completely forgot about us, and our lives returned to their sad, familiar pattern. We never heard from the UN again. We never received anything from them, not even a birthday card.”

What about all the promises? “Other than the ceremonies and cakes, nothing has come of it. We are in desperate need of assistance, but once all the festivities were over, we didn’t hear from anyone.”

Adnan Mevic is still a sometime celebrity within the Bosnian media; three years ago, he was invited to be the guest of honor at a ceremony marking the opening of a new pediatric ward in Sarajevo’s municipal hospital.

“The ceremony was very nice,” his mother said. “The irony is that if Adnan becomes sick or is injured, we couldn’t cover the cost in that very facility.”

Celebrity Status Another unknown individual who entered the world in a flurry of media fanfare that disappeared as fast as it came is Matej Gaspar, born in the city of Zagreb, Croatia, on July 11, 1987 — and instantly declared the five billionth inhabitant of the world.

“For as long as I can remember, on every one of my birthdays we would receive irksome phone calls from journalists wanting to interview me and hear my opinions, as if I was somehow different from any other human being in the world,” Gaspar relates, not forgetting to mention his abhorrence of the media and public exposure. “The publicity did absolutely nothing for my benefit. Whatever I achieved in life has come from my own efforts. I do not want people to see me as a sort of museum exhibit.”

Children of the Billion Demographic experts might not agree on the date that the seven billionth life will enter the world (or if it already has), but they agree on one thing: the number of people in the world has increased at a dizzying speed.

Experts estimate that 2,000 years ago there were about 300 million people in the world, perhaps even fewer. Seventy million of those people lived within the borders of the Roman Empire, and the rest inhabited other portions of the world. It wasn’t until the beginning of the 17th century that the human race doubled and reached 600 million souls. In 1804 the threshold of one billion was crossed for the first time in history.

There are various explanations for this dramatic growth, including the substantial lengthening of the human life span, plus a dramatic drop in the infant and child mortality rate as a result of the development of vaccinations and improvements in hygiene.

For some researchers, the rapid growth of the world’s population has led to concerns of mass starvation and the collapse of human infrastructure. As far back as 1679, Dutch scientist Antonie van Leeuwenhoek calculated that the maximum capacity of the planet would be 13.4 billion human beings. During the 1970s, this dire prediction took on a new life when a group of scientists known as the Club of Rome attempted to predict when population would outstrip resources.

The Club of Rome was intended to frighten, and it succeeded. Scholarly analyses described the depletion of all of the energy sources on the planet, the obliteration of all the earth’s forests in a desperate attempt to make room for agricultural activities to feed the massive populace, and intensive mining in search of every last nugget of iron or copper in an effort to supply the rest of humanity’s needs. The experts concluded their document with an unequivocal verdict — that the continued growth of the human race would lead to the complete destruction of the earth by the year 2000.

Years have passed, humanity continues to grow and flourish, and the year 2000 has already been consigned to the history books, yet none of the dire predictions of the Club of Rome document has come to pass. How did this happen?

Professor Joel Cohen, head of the Laboratory of Populations at Columbia University, has stated that assessments warning of the earth’s limited capacities are ultimately politically motivated, and that those behind the scare tactics want to frighten the decision-makers in order to advance their agendas.

According to Professor Cohen, one of the important developments that the Club of Rome didn’t take into consideration was the technology boom, which has made meeting the needs of the human race easier.

According to Cohen’s calculations, even at the current level of technological development, modern agriculture can currently produce enough calories to sustain a population of 11 billion people with a daily intake of 2,000 calories. The true problem, he says, is not in agricultural production but in distortions that lead to the uneven distribution of natural resources. “In some places there is an unprecedented abundance of food, while in other places billions of people are starving,” he points out. “The number of people living on two dollars a day has doubled since the beginning of the 20th century.”

Excessive consumption is also a problem. According to Professor Cohen’s calculations, the 500 million wealthiest people in the world produce half of the greenhouse gas emissions that are destroying the world’s climate, while the 3 billion poorest people in the world produce only 7 percent. The average American consumes 88 kilograms of resources every day: food, water, plastic, metal, and other products. His African counterpart consumes only a tenth of that amount. While the American population has doubled over the past 50 years, during that same time period, its economy has grown to a size 15 times as great. The number of cars has been multiplied by a factor of 16, and the use of chemical fertilizers and pesticides is 6 times as great as it was 50 years ago.

“The world can sustain a much larger population than that which currently exists,” Cohen says. “The question is only — on what quality of life?”