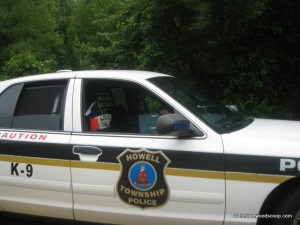 Four people were arrested in connection with driving around and shooting at random people in Howell, police said this afternoon. At approximately 1:44 p.m. on September 1, the Howell Township Police department received a phone call from a male victim who reported that he was riding his bike on Bergerville Road, just into Freehold Township, when a gold Nissan Altima pulled up to him, stopped in the roadway, and shot at him with a gun.

Because of the way the gun fired (noise/no muzzle flash), he believed it to be some type of BB gun or pellet gun. The projectile grazed his left calf, breaking the skin. He was able to provide a good description of the vehicle, it’s occupants and its direction of travel.

“As Officers were searching for the car, we received a 911 call from a male victim who was doing yard work in the front yard of a home on Gristmill Road when the same vehicle stopped in front of the house and an occupant fired three shots at him.” police said. “The victim took a direct hit from one shot. The other 2 missed him. The projectile completely tore away a 1 inch circular patch of skin from next to his collar bone. He was able to provide a description of the car, the occupants, a partial license plate, and it’s direction of travel.”

Sgt. Ron Rhein located the four male suspects in the vehicle at the WaWa at Rt 9 and White Street in Howell. The suspects were subsequently arrested. They are:

· A 16yo juvenile from Howell

· A 17 yo juvenile from Howell

The BB gun was recovered in the vehicle. It is a Tanfoglio 6mm air soft pistol. It strongly resembles a real firearm. Also located were 15 CO2 cartridges and a bag of BB’s.

All four were charged with aggravated assault and possession of a weapon for unlawful purposes. The two juveniles were lodged in Middlesex County YDC and the 2 adults were lodged in MCCI in lieu of $30,000 bail (each; no 10%). The vehicle, a 2003 gold Nissan Altima was seized for forfeiture.

“The suspects and victims do not know each other,” police said. “They were randomly targeted simply because they were there.”