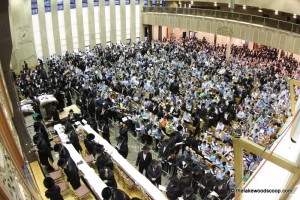 Preparations are well under way for this year’s Worldwide Asifas Tehilim at the Bobover Bais Medrash in Boro Park, scheduled to take place on Tuesday September 30th, the 6th day of the Aseres Yemei Tshuva. For the second year, the names of the cholim will be screened on the wall as the children watch the names of those who are in need of a refuah sheleimoh. Some 6,000 children from 45 yeshivos are expected to participate in the recitation of tehilim as thousands of other children around the world participate via live satellite/audio hook-up.

The asifah, organized annually by Misaskim organization, is an emotion-filled event uniting children from all segments of the Jewish community throughout the country and in even in such far away cities as Antwerp, Paris, London, Manchester, Mexico City, Toronto, Montreal, and Buenos Aires.

The names of cholim are already being registered at the Misaskim office and on its website www.misaskim.org. These names will be scrolled on a wall in the huge Bais Medrash for the children to dedicate their tefilos to the specific names they see, in what is a remarkable plea by the tinokos shel bais rabbon.

As in the past, the asifa is expected to be graced by leading Gedolei Yisroel. In addition to tehilim, the children will daven mincha, say Avinu Malkeinu, which will be followed by the piyut of the Yud-Gimmel Middos Harachamim and Kabbalas ol Malchus Shamayim.

The aseres yemei tshuva gathering will end with a yosom reciting the kaddish, a reflection of the numerous tragedies that klal Yisroel faced this year, including during the recent events in Eretz Yisroel.